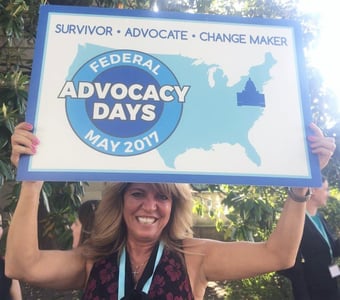 Three years ago, when Ahlam Axelrod started to focus her attention on maternal mental health, she would never have imagined it would be a journey that would take her all the way to Washington D.C.  Ahlam is a Licensed Marriage & Family Therapist for Victor Community Support Services, working in Victorville, CA. In her clinical work, she noticed a high number of new moms struggling with postpartum depression and wanted to figure out how to help this common but largely unaddressed issue.

“I have a responsibility in the community to raise awareness, knowing that one out of eight women suffer from postpartum depression.”
- Ahlam Axelrod

With encouragement from Executive Director, Carl Mascarella, Ahlam shifted her focus from treating these women for general depression to exploring maternal mental health, specifically addressing postpartum depression issues. Working with the Department of Behavioral Health in San Bernardino, Ahlam joined in the effort to develop a group that focused on the issues surrounding maternal mental health. This led to creating the “You Are Not Alone” campaign in the county. Ahlam then began to raise awareness and give presentations throughout the community.

Ahlam began to hear more and more women’s stories; new mothers who were exhausted, depressed, and suicidal in some cases. She met mothers trying to navigate their mental health issues while caring for infants who were still breastfeeding. “Their stories were just heartbreaking,” said Ahlam.

Eventually, Ahlam had the opportunity to meet with a group from the 2020 Mom Project who had aspirations to advocate for maternal mental health issues at the state level. Ahlam really liked what they had to say and appreciated their wealth of resources and information on the subject. They also had proposals for cooperative action with community partners. The research showed that beyond biological predictors for maternal mental health issues, factors such as environment, lack of partner or family support, and social determinants had all contributed to their likelihood for postpartum depression. 1 in 8 women suffer from postpartum depression in California.

Armed with new information and further support for her cause, Ahlam started giving presentations at various clinics and facilities in her area, including Child and Family Services. Ahlam said, “They loved it, because they work with mommies who have lost their children based on neglect, or lack of support. So, when I raised their awareness, they became more understanding of these issues, and more sensitive towards the moms.”

After presenting to CFS, Ahlam recognized the need for raising awareness in the neighboring areas such as Barstow. She went to other clinics and was eventually invited to speak at Barstow Community College to address suicide among teens and college students, for which suicide rates were alarmingly high in Barstow. Ahlam was scheduled to speak to about 50 people, but 200 people showed up. Ahlam is a registered ASIST trainer (Applied Suicide Intervention Skills Training), and has a way of getting people to open up with her honest and direct approach. The Victorville Daily Press covered Ahlam’s impactful presentation in Barstow in the article Shattering suicide’s secrecy in Barstow. Shortly after her time in Barstow, Ahlam was invited to speak to the nursing program at Azusa Pacific University about maternal mental health. Her presentation was so well received, the program director asked her to provide an ongoing two-day ASIST training for the nursing students every semester.

Later, Ahlam was contacted by the president of the 2020 Mom Project, who inspired her to write a letter to a senator about the importance of maternal mental health from her perspective as a clinician. Ahlam wrote to Senator Paul Cook and got a positive response. Eventually she was encouraged to apply for a scholarship to go to Washington D.C. and advocate for federal funding on Capitol Hill. In her application, Ahlam wrote about her experience as a clinician and what she saw going on in the community and the steps she had taken to raise awareness. Within a couple of weeks Ahlam heard back, "Thank you for applying to The National Coalition of Maternal Mental Health Advocacy Scholarship. You have been awarded one."

From May 16th – 18th, 2017, Ahlam and a group of 29 advocates from the National Coalition for Maternal Mental Health met with representatives and learned how to advocate for their communities and clinics. In their last meeting they asked for $5 million in funding for at least three states to provide community partners and health providers with awareness, and aid in screening women for postpartum depression. Women suffering from postpartum depression could then be effectively linked to the appropriate resources. This advocacy was in support of the “Bringing Postpartum Depression Out of the Shadows Act” which was originally introduced in 2015 and passed in both the House and Senate as of December 2016. Where and how those funds will be implemented is still being determined, but Ahlam is hopeful that she will be able to put those funds to use in her community and others that desperately need it. This legislation would make grant money available to support those programs. The fantastic thing about being involved with Victor is that there is a top-notch infrastructure to put that money to use throughout California. Victor recently received excellent ratings in all areas of operations by the Council on Accreditation.

Upon returning to Victorville, Ahlam was again interviewed by the Victorville Daily Press about her experience in Washington D.C. Her local community advocacy is now tied into a much larger social movement that is gaining momentum. Ahlam is particularly proud of the “Health and wellness for mommies” support group that she has developed.  Knowing that they are not alone in what they are feeling is an important reassurance for moms. Ahlam continues to mentor and assist peers in the area of maternal mental health, and currently bilingual clinicians are being trained to extended services to the Hispanic community. Ahlam feels an ethical obligation and says, “I have a responsibility in the community to raise awareness, knowing that one out of eight women suffer from postpartum depression.”

If you know someone who is struggling with maternal mental health issues, Ahlam recommends calling 211 or contacting the Department of Behavioral Health, both can connect that person with the help they need in their areas.

In Victorville they can call the Family Resource Center: