Walk Out of Darkness 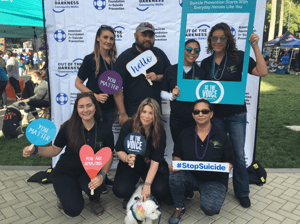 September was Suicide Prevention Month and Victor Community Support Services (VCSS) Stockton got involved! The Cultural Awareness and Community Outreach Workgroup organized a team of volunteers to walk in the American Foundation for Suicide Prevention’s Walk Out of Darkness on September 29th at the State Capital, a community walk. The walk occurred throughout the country during different days in the month of September to bring awareness to the epidemic of suicide and raise donations to fund programs and research for suicide prevention in a variety of different populations.

We had a total of 10 people who volunteered to walk and an additional three people who volunteered their time to man a table that we set up at the event. The workgroup facilitated a rock painting activity at our table in which event participants could take the time and paint the name of a loved one who was lost to suicide or a positive affirmation. We also handed out pamphlets about Victor to help with not only resourcing but to connect with the community. VCSS Stockton was able to raise $1,478 through the event.

In 2016, the American Foundation for Suicide Prevention published the following statistics for US averages:


The number of deaths in 2016 that were attributed to suicide was almost 45,000, making suicide the 10th leading cause of death. In an article for the Washington Post it was stated that, “the problems most frequently associated with suicide, according to the [2017 study in the journal Social Science and Medicine], are strained relationships; life stressors, often involving work or finances; substance use problems, physical health conditions; and recent or impending crises.”

Giving people the resources they need and professionals to talk through the hard things and to learn how to handle a tough situation is extremely important. At Victor, we believe in fighting for those who need it most. We believe in kindness and the value of dedication, and the importance of giving back.

You are able to donate all the way up until 12/31/18. Click the button below if you would like to donate and contribute to funding programs and research for suicide prevention.