Victor Will Continue the 95 Year Legacy of Rosemary Children's Services 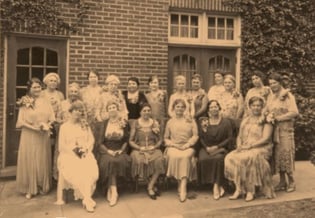 Starting in 2015, a mutually beneficial relationship began between Victor and Rosemary Children's Services. Victor leadership saw Rosemary as an organization with a similar heart and mission, and an incredibly rich history of service in the LA County area. We are honored to say that on Nov. 1st of this year, Rosemary Children's Services is now Victor Treatment Centers. We have spent the last few years aligning our mission, clarifying our roles, and readying ourselves for this change. The leadership at Victor was committed to honoring the legacy of Rosemary and their 95 year history in LA County. Let's take a look at some highlights from that long history of service.

1920 - The Pasadena Shakespeare Club decided to create an alternative to juvenile hall for children that had suffered abuse, neglect and abandonment. They picked a quote from Shakespeare's Hamlet as the inspiration for their name: "There's rosemary that's for remembrance: pray you, love, remember." This quote inspired the original name - Rosemary Cottage, which was a shelter program for teenage girls.

1923 - Rosemary filed their articles of incorporation.

1928 - Completed construction on The Cottage - a residential home that housed 19 teenage girls.

1940's - A team of Social workers was added to the staff to introduce treatment services for the girls and their families.

1962 - The annual benefit event "An evening with Star Chefs" was started.

1970 - Robert Romberger donated what is now called the Romberger House. This was Rosemary's first home in South Pasadena and housed 6 teenage girls.

1993 - The name was officially changed to Rosemary Children's Services.

1994 - Added a licensed foster family agency to the organization.

2007 - The on-grounds children's library was completed.

2008 - The Cottage Kitchen remodel project was completed, serving 20,000 meals annually. In this year Rosemary also received COA accreditation and was recognized as an outstanding provider.

2009 - A transitional housing program was started for young women 18-24, who are at risk of homelessness.

Although Rosemary's name will change, their mission and values will stay the same, because they align so perfectly with Victor's. We look forward to incorporating their experience and services into our larger network so together we can make the greatest impact for children and their families. Rosemary's experience with foster care and adoption will be of great benefit to our organization and to the communities we serve. We have so much great work to do in the years to come.

If you or some one you know wants to be a part of our shared mission, "to be a catalyst for sustained improvement in the lives of those we touch," please take a look at career opportunities with Victor by clicking below.