Veteran Suicide Crisis: Serving Those Who Served Our Country 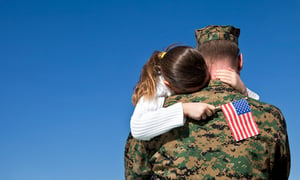 Reports show that veterans are twice as likely to die by suicide as civilians according to the Department of Veterans Affairs. This alarming statistic sadly translates to about 18 veterans dying by suicide every single day.

Victor Community Support Services has been an engaged county partner in suicide prevention training and events for years. In collaboration with other support services in our communities, we do our best to support veterans in need of help. Our latest organizational report shows we were able to help over 300 military families with PTSD. Too often however, we don't get to meet them until they've reached a point of crisis.

We have the following client story that illustrates what it can feel like for a veteran suffering with mental health issues and potential treatment strategies.

Adjusting to Civilian Life After Deployment

After 5 years of service in the Navy, with one overseas deployment, this particular veteran seemed to adjust well to civilian life. He and his wife created a lifestyle that “checked off all the boxes”: full time work, house, property, children, camping and fun outings…but emotionally, he felt like he was suffocating.

The client and his wife talked past each other, minimized each other’s needs, and thought that going through the motions of marriage would be enough. The routines that could have been comforting instead felt monotonous. He carried on a secret affair, but even the excitement of something new couldn’t make him feel any better. The guilt he felt only suffocated him further.

He couldn't see a way out, without causing himself and the people he cared about significant pain. He woke up one morning and collapsed on the floor, thinking, “I can’t do this.”

A Moment of Crisis

This veteran drove himself to a bridge overpass and considered jumping off, but he just couldn’t end his life. After calls for help to family and local law enforcement, the client was secured on a 72-hour hold in a local psychiatric hospital. Then he was remitted into the hospital for another 2 weeks.

As the acute risk of danger to himself had passed, he was discharged to the care of a local psychiatrist. The psychiatrist prescribed medication, recommended outpatient individual and couples therapy to address the clear breakdowns in communication, and referred them to VCSS Military Family and Support Program.

Treatment helped the client to understand the emotions he was feeling and ways to label and express them- something that was not modeled for him by his family of origin and actively avoided during his time in the Navy.

“We did our work, drank a little on the weekend, and just lived life”.

The client began to see that his attempts to hide from his emotions and run from the consequences of his decisions had backfired. He and his wife began a new paradigm in communication of needs and boundaries. Over time, they worked through infidelity and rebuilt connection.

The client began to understand the same amount of effort it took to hide could be the very tool to rebuild the joy and collaborative spirit in his marriage. As he began to see hope in his family, the desire to end his life diminished, and then halted completely. The affair was over and divorce is no longer on the table.

He created a wellness plan to help him clarify the aspects of life that allowed him and his family to thrive, and he began to see how he could join in on the joy of his family instead of having it be just a routine full of pain.

He and his wife still have a road to recovery ahead of them, but now, they can describe the gifts that they bring to the relationship that will keep them going: honesty, teamwork, fun, collaboration, communication, and setting boundaries.

To date, the success of this veteran was only possible because of collaborative partners; we are part of a larger community of providers, all of whom are willing to refer and manage their scope in the service of our veterans.

Talk to the veterans in your life. We need to normalize the conversation about PTSD, depression and veteran suicide. If we are going to improve, it needs to be out in the open. Know how to connect veterans to local services in your community so they can get the support they need.

If you feel called to take a more active role in the prevention of veteran suicide and PTSD treatment, we invite you to explore career opportunities with Victor. Click the link below to see our current job openings.