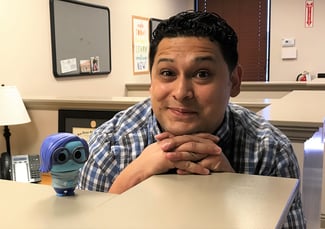 Joseph Olvera has been working with Victor for over 12 years.  Providing excellent, and passionate service to our kids and families. We are grateful for his contribution and asked him to share a story with us from his many years with Victor. Here's what he had to tell us:

"Upon recalling this particular client I remember driving into a picturesque neighborhood, complete with American flags perched on the eaves of every house above well manicured lawns and flower beds.  I was cordially received into the home with an offering of a bottle of water and baked goodies from the parents.  I felt like if I had asked for warm apple pie the mother would have responded “do you want a crumb topping or just regular, cause we have both”.  As we got to know each other the parents told me about their adopted son who was now 14 and how he had never really connected with any therapist he saw, leaving most therapists to primarily work with them on how to deal with their son.  They shared their hardships over the previous few years in which they “lost control” of him to due to him having another life online and preferring his time on the computer to interactions with real people and how he used to refuse to get off the computer and go to school. This power struggle ultimately resulted in the client being placed in a residential treatment facility where he felt betrayed by his parents for “leaving” him there.  Since returning home they had struggled to build trust with him, set boundaries surrounding preferred activities, and help him learn to take responsibility.

As I sat there listening to them express their concerns about the past and hopes for the future I suddenly realized they’re expecting me to help! “But what could I do” I thought to myself.  They already had him meet with a few therapists, a Psychologist, a Psychiatrist, and even the mother had a Masters in Psychology.  What was an Associate to do? Deep breath.  All this and I had not even met him yet.  “He’s in the garage” they said “painting”.   So into the garage we went and as I turned the corner I saw a young man amongst a menagerie of tiny creature figurines all hand crafted by him. As he painted one about the size of an egg we talked about his love for this elaborate campaign style board game for which the figures were used.  As time went on he taught me how to play and let me borrow one of his sets he created, all the while we talked about how to improve his ability to interact with others through better communication styles.  We exchanged trades, mental health for his insights into his various hobbies, the currency was knowledge.  Weeks turned into months and we developed  a steady rapport and to his credit he was able to improve his ability to resolve conflicts with his parents without melting down.  He was even able to present a plan for his own education during an IEP meeting for the first time in his life.  I saw him taking control of his life and develop the skills necessary to interact with others.  This culminated in an incident out in public in which the client got into a dispute with other players of his campaign style board game at one of the local comic shops.  In the past the client would have melted down at home afterward and hurled nasty insults at his parents because he was mad at the players from the store.  Instead he wrote an eloquent response on an online message board to the players from the game who also frequented the online postings then he went to bed.  As he would often say about the figurines he would design “their abilities have been upgraded”.

We ended services on a high note as the client was attending school at a rate acceptable to the school and was moving from Special Day Classes to more mainstream classes with mostly A’s.  The client had the ability to calm himself down by walking around the home after he would get into arguments with his parents and stated that he had “learned enough for now”.  There were some speed bumps towards the end but more importantly than him being perfect, was that he was able to resolve problems on his own without needing a “therapist” there to help him."

Sometimes it just takes the right person and a little perseverance to make a meaningful difference in someone's life. We know that Victor employees are out there doing this great work every day. We love to hear your success stories, please keep sharing them with us.

At Victor we believe that helping others soar is both a gift and a responsibility. That’s why our mission starts with supporting strong employees who are valued, respected, and listened to.