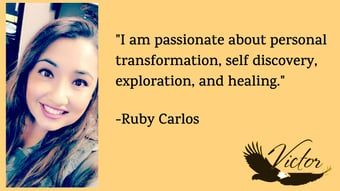 It's been just over a year since Ruby Carlos started working at Victor as a Bilingual Clinician. She recently had a breakthrough with a client that we just had to share with everyone. It's stories like these that keep us going, and doing the hard work that pays off with perseverance.

Working with teenage clients has it's own set of challenges and rewards. Ruby started working with one particular teenage girl when she was in 7th grade. This young girl was exhibiting symptoms of depression. She even said that she was sad for most of the day and was also easily irritated. She would spend long hours in her room, isolating herself from her friends and family...and it got worse.

She would stop bathing for long periods of time, she struggled with insomnia and fatigue. Unable to concentrate, her grades suffered and she had feelings of hopelessness and worthlessness. Eventually thoughts of self-harm crept in and she began cutting herself.

Ruby utilized multiple treatments in her approach to help this client, including Cognitive Behavioral Therapy, Motivational Interviewing and Family systems. Two months into treatment Ruby realized they were actually making progress. The client had been unable to develop trust with therapists in the past, due to a bad experience with a school counselor, but Ruby had started to develop a connection with her. One day she opened up to Ruby about cutting herself and said, "Ruby, help me, I am cutting and don't want to do it anymore."

It's been almost a year since they started working together and the client has made so much progress that they were recently able to finish up and close services. Her depression symptoms have lifted, thoughts of suicide and self-harm have been gone for 5 months, and she's been openly communicating with her family and friends again. The client is actively forming positive relationships. She will discuss her feelings, partakes in social activities and even joined a drama class and has been involved in multiple performances. She just recently tried out for volleyball and made the team too! Her grades have significantly improved rising from F's to A's and B's.

The client's mother is beyond thrilled with her daughter's progress. During the session to terminate services she said there had been a complete change in her daughter and that she was so proud. She also stated, "Not only did you help her, but you also helped the rest of the family, we are a family again."

Reflecting on this experience, Ruby said...

"We live in a world full of challenges that can be overwhelming and confusing. If I think about my darkest moments in life and everyone else around me, I know how powerful it can be to have someone supporting and encouraging you to be your best and most authentic self. I am passionate about personal transformation, self discovery, exploration, and healing. I want to be the one to walk alongside people in their journey and instill hope to help them get the most out of life."

Ruby has perfectly summed up what we do at Victor. Our stated mission is to be a catalyst for sustained improvement in the lives of those we touch. That's what Ruby did for this client and that's what we try to do for every client as well as our own employees.

Are you interested in a career where you can be inspired while helping others?
Consider a career at Victor - click below...