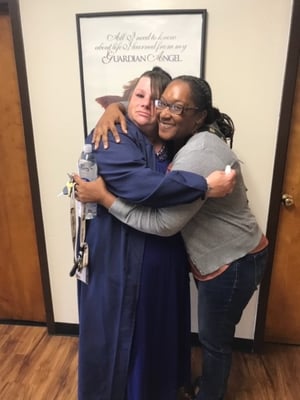 Our most recent client success story comes from Christina Thrower, M.A. one of our School Based Facilitators at Victor Stockton. We believe in celebrating the success of both our staff and clients, so if you have a good story please share it with us! You can check out our growing list of staff stories by clicking here.

Christina started working with an 11-year-old young man in May of 2018. His mother had struggled repeatedly with substance abuse and was also trying to deal with the behavioral challenges of her son while living in a shelter and going through an addiction rehabilitation program.

As a School Based Facilitator, Christina gets referrals from the school for students who may be struggling and could benefit form the program. Families have to choose to participate in wrap around services. Typically Victor Facilitators provide 6 months of intervention services focused on the main reason for the referral: educational needs, attendance issues, parent collaboration or academics. Meetings are held at the school where Christina collaborates with school staff, doing classroom observations, presenting at staff meetings, sitting in on individual and group study sessions and conducting classroom presentations. Outside of the school Christina's work continues by helping connect families with other resources, such as parenting classes, conducting home visits and CFT (Child and Family Team) meetings, and even offering transportation assistance when needed.

Christina received multiple referrals for this particular 11-year-old boy, who was struggling in school. She put in a call to his mother who was receptive to setting up a meeting to help her son, although Christina could tell she was a little leery. Once they had the opportunity to meet, Christina saw how intense this case was going to be compared to what she was used to. Challenging as she knew the case would be, she could tell the mom was eager and willing to do what it took to get her son help and to be a part of his life.

During the first meeting they setup for this young man, Christina quickly discovered how hard this case would be. The Family Support Counselor was unable to attend, so it was just Christina and the two clients, who are triggers for each other. The son began throwing furniture, the mother was crying, the son then ran out of the room and Christina was trying to facilitate this situation all by herself. Trying to push through, Christina later discovered that the son would revert to talking like a baby when his mom was around. Christina felt like she was in over her head and talked to her supervisor to get advice. She got some input on ways to diffuse the situation and try to setup more successful meetings. Through all these challenges she could still see how much they wanted to change. She saw signs of hope in the young man, and the mother begged Christina for help and Christina dedicated herself to the task.

Putting in the Work

With both clients and Christina fully committed to the job, they started the real work. Christina implemented a suggestion from her supervisor and made the meetings shorter, breaking them up into smaller and more productive segments. Meetings would usually start with a strength activity and then a connection map activity, where they look at the natural supports for the family. They would work through a school compliance plan which reviews the issues at school and together they would come up with a plan response. They also dealt with the son's aggressive behaviors and frequent runaway problems. From their school compliance safety plan they came up with a strategy for the mother to use when that happens. Who to call and what to do in those situations. This helped the mother feel like she had structured steps to use in these situations instead of just going into crisis mode. Setting up some structure for youth who have had very little is difficult but highly important. Even though kids complain about rules, they actually thrive when given structure, boundaries and responsibility.

In Christina's continued work with these clients, she would go to the shelter where they lived to have meetings. Shelter life was hard on both the mother and son. Christina really had no idea what shelter life was like before this experience. So she worked with the mother to develop coping skills and come up with a plan for situations that came up. The mother had developed the instinct to fight. She would say, "Oh I'm a fighter. I'll fight them. I'll fight her. That's how I was known in the streets, as a fighter." It had helped her survive and she was proud of it, so Christina had to re-frame her thinking on that reaction, saying "Well, we don't want to have you get to that point, so now you know that you can fight, but the thing is, do you want to fight?" The mother would respond saying, "No, I don't want to fight. I have this son. I'm not about that life anymore." Christina worked with her to come up with other ways of dealing with situations and in that way she could start modeling more productive and stable behavior for her son. Fight or flight can't be the only response.

Christina would pick up the son to take him to counseling and activities since the mother was on a restricted rehabilitation schedule. She couldn't even leave the shelter without permission, couldn't have electronic devices and had an evening curfew. Christina collaborated with the shelter and even met with the director to arrange a pickup and drop off schedule for both the mother and son. Her son was able to participate in the summer social skills group twice a week. He also got involved in the bowling and fishing groups. The structured activities and regular socialization in a positive environment really started helping this young man develop emotionally.

Something that Christina loves about Victor is their relationship with the schools. Even once school is out, Victor still has access to the school for summer activities and social skills development groups for kids. This was exactly what this 11-year-old boy needed. He needed to be around his peers. Christina also linked him up with more mental health support that he required for helping him deal with the trauma that he and his mom had been through. Pretty soon he was showing real improvement, and went from running away all the time, arguing with his mom and talking like a baby to now being able to sit through a meeting and actually participate.

Meanwhile the mother made it to every single parent support group meeting and parenting classes. She finally was able to graduate the rehabilitation program and got her certificate. Regarding their progress, Christina said, "I was so proud of them. They put in the work."

This particular 11-year-old young man graduated his programs for behavior and social skills, and received his certificate. He had even caught up in his academics where he no longer needed an IEP (individualized education plan). He was at the appropriate academic level for his age. At his mother's graduation ceremony the young man was happy and hopeful, after many years of struggle. Christina, along with others who had worked with the mother and even the Vice Mayor attended the ceremony as well. She now works at the shelter and has new privileges and responsibilities - a very big deal for her.

Christina thinks that Victor is unique in our ability to go into clients homes, their environment and make a difference. "I was at that shelter multiple times a week, and it's a hard life" said Christina. Victor gets involved in client's lives, knowing how they live is key to knowing how to help them. Now the mother is taking a leadership role at the shelter and bringing what she has learned from Victor back to others at the shelter. She's working towards a better life for her son, and he is now in a place where opportunities are opening up for him.

This was the case that Christina thinks took her to the next level as a service provider. She says "I was good at what I did. I think I did it very well. But I think this was the case that was pivotal for me. It challenged me. It almost broke me because I was not used to the environment this boy was living in. I had to seek to understand in order to be able to give he and his mother the best services that I could. It's what they deserved." Christina thinks that she and her client helped each other grow. She is thankful for that opportunity.

Do you want to make a meaningful difference in someone's life?
Consider a career at Victor.