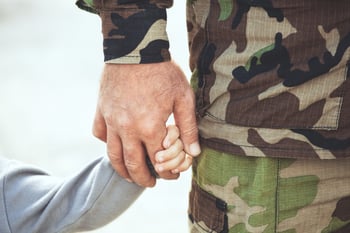 After multiple deployments to Iraq, a Soldier was coming home for good, but after living in a war zone that's easier said than done. Every time he returned  home from deployment in the past, he felt like a piece of him was missing. This time was no different. He didn't feel like the same Soldier, the same Man he once was.  Emotionally he didn't feel the same, and physically he was different as well.

The Soldier was being medically discharged for having respiratory issues with his lungs from working in the burn pits while deployed to Iraq. Readjusting to civilian life was not going to be easy. The tools you use as a soldier and the tools you use as a husband and father aren't always the same. He was so used to being deployed he wanted to treat this new stage like another deployment assignment. Objectives, structure, and discipline are the backbone of military and family operations, but we go about achieving them in drastically different ways. This particular soldier needed some new communication tools to connect with his family.

The Soldier and his wife were having marital difficulties, which ended in frequent discussions of divorce. His wife went to Family Advocacy on the military base, and found a flyer to the Military Services and Family Support Program at Victor Community Support Services in Barstow, CA. They decided to make the phone call to be assessed for Early Intervention and Prevention services. The Soldier and his wife received Prevention and Early Intervention Services. They received services that included: individual and family therapy, case management and linkage services to connect them to various community resources.

During the course of treatment, they both learned about mental health symptoms related to post traumatic stress disorder (PTSD), including depression. The Soldier learned how to connect to the VA Services, including registering in the VA's Burn Pit Registry. He and his wife learned how to process their feelings with one another, developed positive communication skills, and worked together to gain insight into the reasons behind their individual problems. The Soldier was able to learn how to decrease his stress levels while improving his self-care, appropriate parenting, overall communication and social skills. He learned the importance of modeling positive behaviors for his family.

In his most recent report, the Soldier and his wife say that they continue to implement the communication and coping skills that they learned through the Military Services and Family Support Program. He and his wife have not discussed or threatened divorce since starting therapy. The Soldier was able to recognize that his symptoms were affecting his relationships, and with help has made great improvement.

They continue to practice their learned communication skills and are open to discussing their feelings. Where in the past they would turn to isolation or blame during an argument, now they can work through a dispute in a constructive way. They practice self-care skills and have started to engage in activities and hobbies, such as nightly walks, family dinner, date night, and self-care time. The Soldier has realized that coming home to his family is not just another deployment, but a new chapter in his life. He has been able to emotionally and mentally process his medical discharge, and looks forward to new adventures that are waiting for him. In his words, "Everyone needs someone to talk to, and I am a better man for it."

At Victor, we believe that every individual deserves a chance to succeed.
We believe in challenging ourselves to be better.